The Way to Kavala

After having been fed for many days by the bosom of the sacred countryside we decided to move again toward the river made by walking souls.

Along the way the great cathedrals leave te way to the minarets who come out here and there like mushrooms while we walk alongside the mountains getting near the Macedonian land.

Kosovo is just there, a few steps from us, closed between the mountains and stuck by the international blocks. A land that creates and stand watching the parade of thousands of refugees every day. We arrive at Presevo, a muslim enclave with majority of Albanians in the Serbian orthodox reign. And it is right here, in the headquarter of the first Serbian registration center, that we meet again the uncontainable human river. All the work is done at the train station where, once registered, those people spend infinite hours waiting a train directed to the Croatian borderline. Another inexorable waiting. 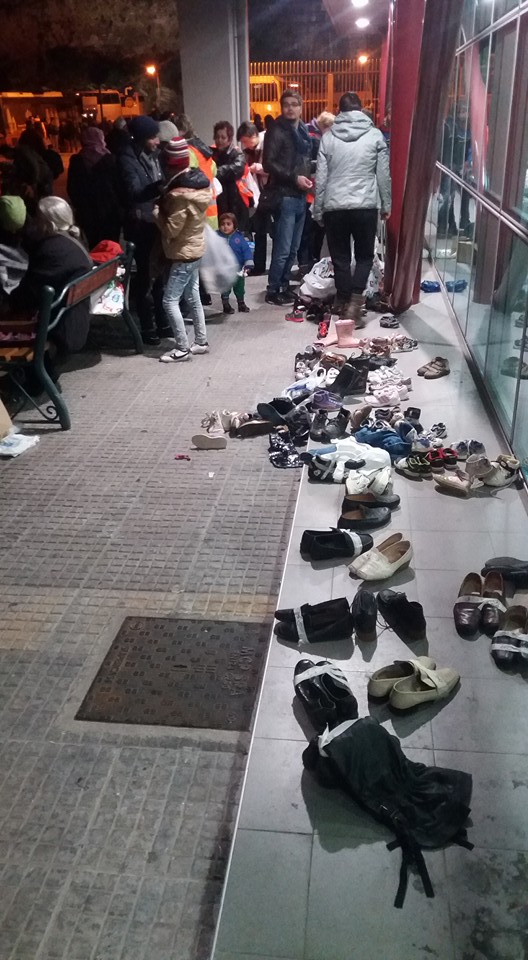 Children running here and there on the railway lines, mothers trying to warm their poor, cold creatures, tattooed grannies specialized in waiting and a couple getting caught by the love under a thermal blanket. Everything happens between volunteers distributing clothes and hot drinks and taxi drivers always ready to carry home some earning.

Suddenly the paper roll is being opened letting out all the light that it’s carrying deep inside. Like a magic all the barriers are destroyed, a channel of direct interaction is created, no word is needed.

Drawings perfectly describing their situation, like the one made by Huseyn, 10 years old, from Aleppo, in which a bird is carrying the last fruits of a dead tree to a new home. The travel of the hope.

It’s wonderful to see the sweet manner with which the art can destroy any kind of barrier.

The man, instead, build them.

Indeed since few days that enormous human river had dramatically reduced. From one day to the other men inaugurated a gigantic dam, as big as the inhuman engineering capacity could build it. A dam that’s separating a fat continent from all those outskirts that are only asking for a piece of bread. Only Syrian, Afghan and Iraqi water can pass trough, all the other rivers are stopped there, flooding the surrounding area. Stuck. It’s been as if in Iran there’s not a violent dictatorship, if in Somalia there’s not Al Shabaab or in Nigeria Boko Haram, as if Pakistan isn’t the cradle of terrorism.

It’s as if a man can choose between who has the right to live and who hasn’t.

Everyday those people walk along the railway line that’s passing through this tent city to check if the dam is opened or not. Water bullets are falling from the sky and the great Mafia of the hospitality offers only a biscuit pack, some chocolate and a bottle of water. You can buy everything else from the little stalls here for this sad occasion.

The land is covered with mountains of garbage acting like fuel for getting a little warmer. A man with frozen feet tries to heat his body with the fire lit from a little oil fell onto the rail. Probably the same oil stolen from the place where that man, like many others, belong. The oil can go anywhere, not them.

A granny dressed all in black clothes as if she was in mourning for all the humanity is grabbing her granddaughter’s hand, with her pink balloon full of hope. A Congolese boy stuck by the cold temperature and by despair repeats incessantly: “I prefer to die instead to go back there”.

There is also who stitched his lips together as a sign of protest and who’s thinking about scenic suicide as the only way to unlock that situation. The stress is reaching the limit. Everything under the miser eyes of the taxi drivers, sandwich sellers and hotel owners who converts their halls into supermarkets and rent the floor of their basement and maybe their wife too. Everything under the eyes of the volunteers and reporters hit by an enormous sense of impotence that kills every hope in a better tomorrow.

A majestic and invisible dam. On one side a continent eating handsomely, on the other all it’s victims arrived from every mistreated place to ask the right to stay alive. A basin of stuck water growing everyday more. Soon it will became a sea and as that gigantic stone will fall from the mountain it will be a disaster. 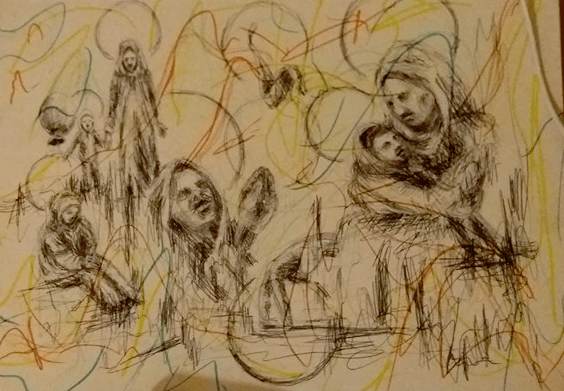